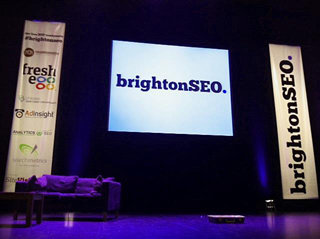 Brighton SEO is one of the biggest SEO conferences in the UK, if not in Europe, it’s got a great and lively atmosphere, and it’s also free, which is one of the reasons why the 1000 tickets went in around 15 minutes when they became available. It’s well worth attending if you can, so sign up to get newsletter emails, and make sure you’re at your desk when the tickets become available!

The conference took place all day on Friday April 13th in the Brighton Dome, apparently the venue that Michael Mcintyre played last time he was in Brighton – so a proper-sized venue. As well as having great speakers, it also involved nerf gun fights, a swingball competition and a magician. Not just educational but really entertaining too.

There are several really in-depth write-ups (which I won’t add to), I’ll just list them here. Beneath that list I add my own personal key takeaways from the conference:

1. The very first session was a panel session involving amongst others Pierre Far from Google, who ended up being given quite a hard time regarding the Not Provided issue in Google Analytics.

One really interesting thing that Pierre kept mentionining and had mentioned frequently the night before was that “SEO is not a checklist”. He kept emphasising his and Google’s frustration (including Matt Cutts) that many SEO folk continually believe that the best approach to optimising a website is via a bullet-point based approach. You know the classic: “here are the ten golden tips to lead you to search optimisation nirvana”.

His suggestion again and again was to “think what is best for your users of your website, and build for those requirements”.

Now what interests me about this, is that effectively Pierre was telling a room full of 1000 SEO consultants that Google’s best recommendation is not to think about search. Essentially, leave search to Google – think instead about user-experience, conversion rates, relevance, engaging content – but don’t restrict your mind (and hence your users experience) by focusing on a standard SEO checklist.

It’s an interesting perspective, one that co-incidentally was then touched upon at http://www.ionsearch.co.uk/ by Dave Snyder (more on Dave below), who poured scorn on such a point of view.

Stefan Hull of Properllernet gave a talk which mentioned Nassim Taleb’s book, The Black Swan: The Impact of the Highly Improbable – which for me, meant it deserved a mention. Essentially his point (I think) was that to ask why are search optimisers surprised/outraged/upset when Google and/or Microsoft roll out a change that is awkward to adapt to?

Life is full of difficult-to-predict events, search optimisation being no exception (you could quite happily argue that its far more likely in fact), so one should build in as much ability to withstand such events.

I’m sure Google would argue that the best way to do this, is to “build for your users” …

All videos, including one of me giving my talk, can all be found here: www.brightonseo.com/category/video/; and official photographs can be found on Facebook here: http://ow.ly/apekz

A few days after Brighton SEO, we nipped up to Leeds to go to the very first ionSearch Conference on April 18th, put on by the lovely folks at BlueClaw.

I think it’s fair to say that ionSearch was a more sober affair (apart from later on in the evening), but then its scale was smaller (in terms of attendance), and attendees paid to come.

It was a multi-stream conference, with talks taking place in the main auditorium, panels happening in a separate room, *and* product demonstrations being given in another space.

A few good summaries of the event:

… and keep an eye on the main ionSearch blog for summaries, videos, and other useful updates.

There were many good speakers, too many to properly mention and to do justice to really. I enjoyed Lyndon Antcliff and Andrew Girdwood, LBi Bigmouth Media discussing “content strategies”, but the highlight of the day for me was Dave Snyder discussing “Content Marketing In The Post-Panda World”.

Much of his talk centred around the constant on-going battle between Google and the slightly dark-art search optimisers constantly trying to work their way around Google’s latest algorithm tweaks. He gave one example of how in the US it’s possible to rent a cash-machine, place it at a physical location which you wish to “claim” on Google Maps, and then use that physical location (which is now yours) to drive traffic.

Dave touched upon how from his point-of-view the Google/Matt Cutts “just build for your users” mantra really boils down to “build your content and pray” – and how given the importance of search traffic to so many businesses this clearly isn’t a strategy many can take. Many businesses simply have to explore pro-active ways of trying to engineer more search traffic, it simply isn’t viable not to try.

Finally, Dave discussed the new “unnatural link warnings” messsages that have begun to be sent to organisations, in particular the appeals to list the practices you’ve followed. Dave made the excellent point that Google clearly don’t know what practices have been happening, otherwise why would they ask? So Google are fishing to try to find out what’s going – Dave believes that a quite viable practice is … to do nothing and wait. It’s quite possible no penalty will be applied. In short, don’t panic.

ionSearch Conference was a great conference, one well worth attending.